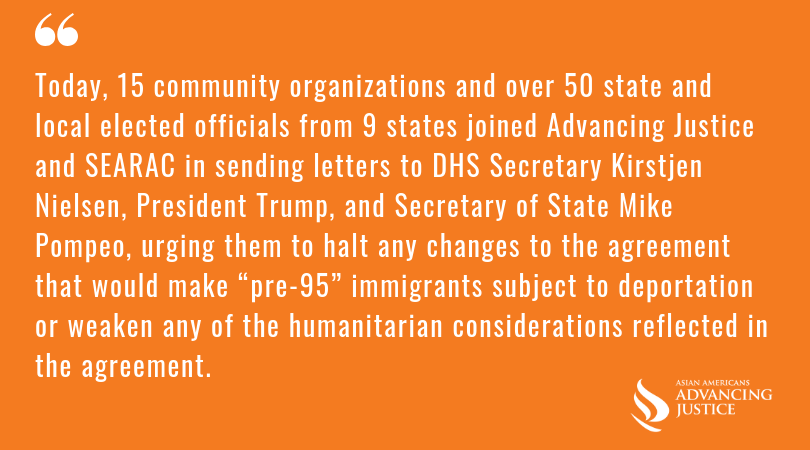 Atlanta, Georgia – The Department of Homeland Security (DHS) is reportedly meeting with Vietnamese government officials this week to discuss potentially drastic changes to the terms of an agreement that has governed the deportation of individuals to Vietnam since 2008.

Asian Americans Advancing Justice (Advancing Justice), an affiliation of five civil rights organizations, and the Southeast Asia Resources Action Center (SEARAC) strongly oppose any changes to the agreement that would erode protections currently afforded to Vietnamese immigrants, including a provision that does not permit those who entered the United States before July 12, 1995 to be deported.

Today, 15 community organizations and over 50 state and local elected officials from 9 states joined Advancing Justice and SEARAC in sending letters to DHS Secretary Kirstjen Nielsen, President Trump, and Secretary of State Mike Pompeo, urging them to halt any changes to the agreement that would make “pre-95” immigrants subject to deportation or weaken any of the humanitarian considerations reflected in the agreement.

Modifications to the agreement could potentially make over 8,500 individuals immediately vulnerable to deportation. Many of these community members came to the United States as refugees, fleeing war and persecution, and have lived here peacefully for decades.

“For many years now, the repatriation agreement between the U.S. and Vietnam has afforded thousands of former Vietnamese refugees the opportunity to move past mistakes they’ve made and rebuild their lives in the country that they call home,” said Phi Nguyen, litigation director at Advancing Justice – Atlanta. “The agreement recognizes the inhumanity of forcing refugees to return to a country that they fled many years ago in the aftermath of a U.S.-backed war. Our government should not turn its back now on the very people it felt a responsibility to take in.”

“America is my home now. All my family is here. My life is here. I hope that the U.S. government will act with honor and compassion—not just for myself but for the thousands of others who are in the same situation as me,” said Dai Diep, who came to the U.S. as a refugee in May 1995.

TAKE ACTION:
Add your name to the thousands who have urged the administration to stop upending Vietnamese and Southeast Asian refugee communities: bit.ly/supportvietnameserefugees.

Southeast Asia Resources Action Center (SEARAC) is a national civil rights organization that empowers Cambodian, Laotian, and Vietnamese American communities to create a socially just and equitable society. As representatives of the largest refugee community ever resettled in the United States, SEARAC stands together with other refugee communities, communities of color, and social justice movements in pursuit of social equity.