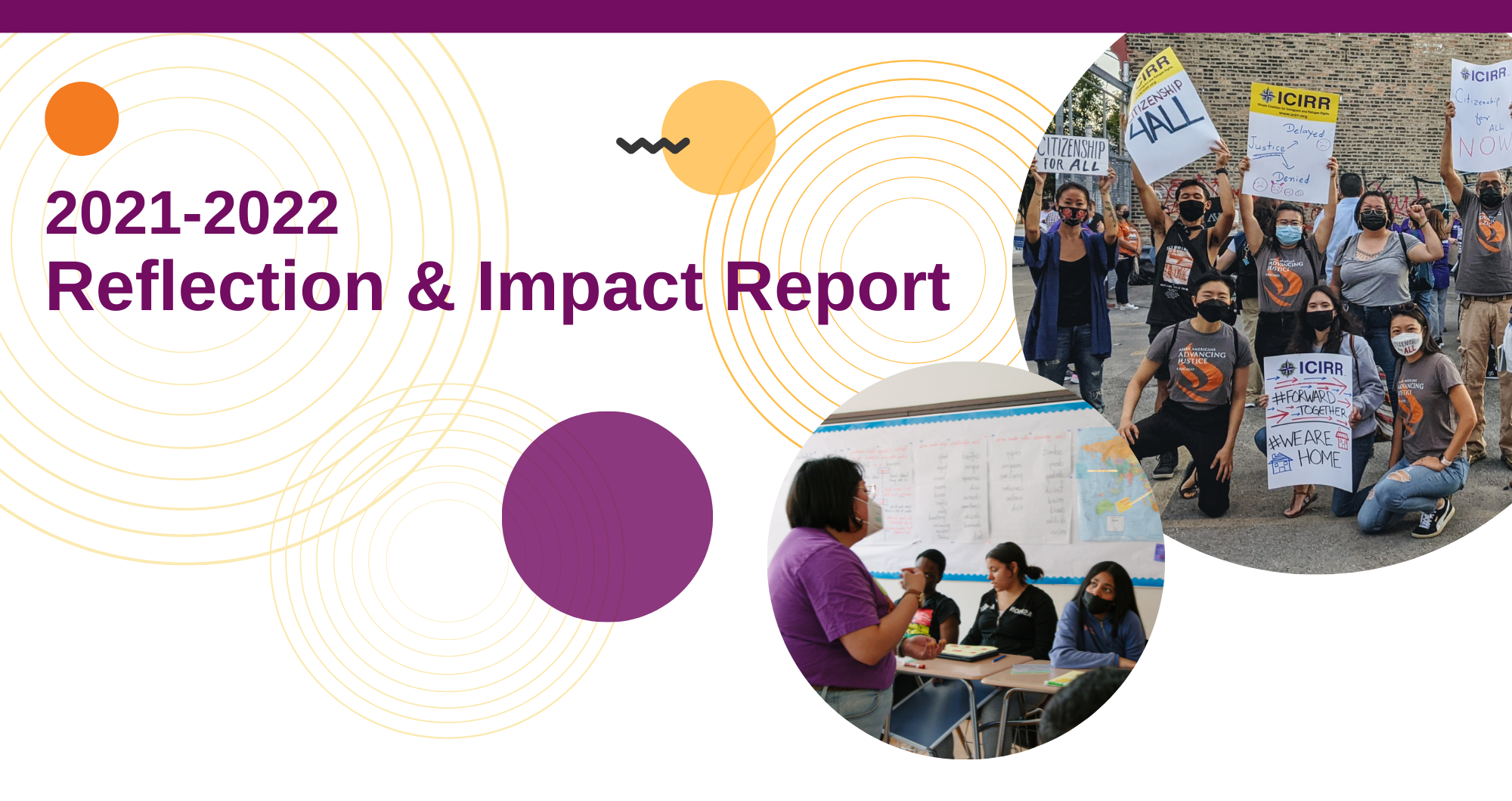 Asian Americans Advancing Justice | Chicago builds power through collective advocacy and organizing to achieve racial equity in Chicago, the Midwest, and beyond. For 30 years, as a 501(c)(3) non-profit, Advancing Justice | Chicago has worked to bring together the Asian American community and create change in our communities through leadership development, advocacy, and civic engagement work. Asian Americans are the fastest-growing racial group in Chicago, Illinois, and the entire country.

As the only progressive pan-Asian power-building organization in Illinois, Advancing Justice | Chicago is creating meaningful policy change and building a diverse grassroots base that guides our campaign priorities and strategic vision. We know that change doesn’t happen overnight. But with your support and involvement, our work will continue to empower hundreds of community leaders to lift their voices, and take action to advance racial equity. Learn more about our key issue areas, our impact, and how our vision in action.

In 2022, Asian Americans Advancing Justice | Chicago celebrated its 30th anniversary. Check out our 30 Years of Advancing Justice | Chicago brief video as we come to end of our milestone year. We are proud to reflect on how far we have come, and grateful for all of the community leaders and stakeholders who have helped in our mission to uplift the voices of the Asian American community of Chicago, the Midwest, and beyond. Thank you for 30 years of support and allowing us to continue our work of advancing justice.

PROGRAMS THAT EMPOWER THE COMMUNITY 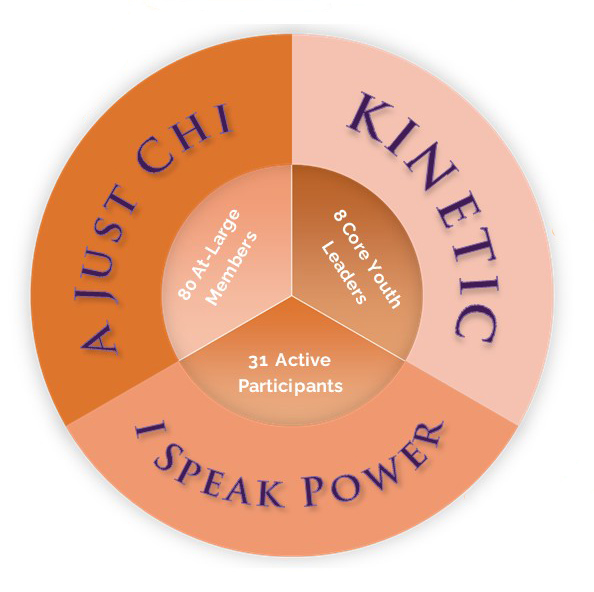 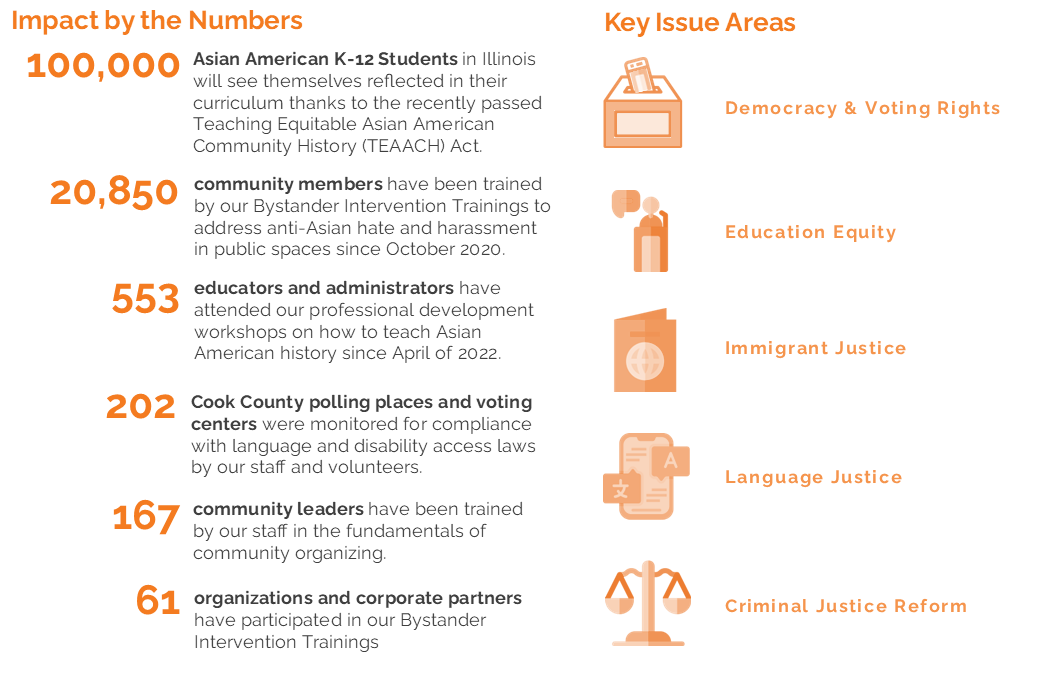 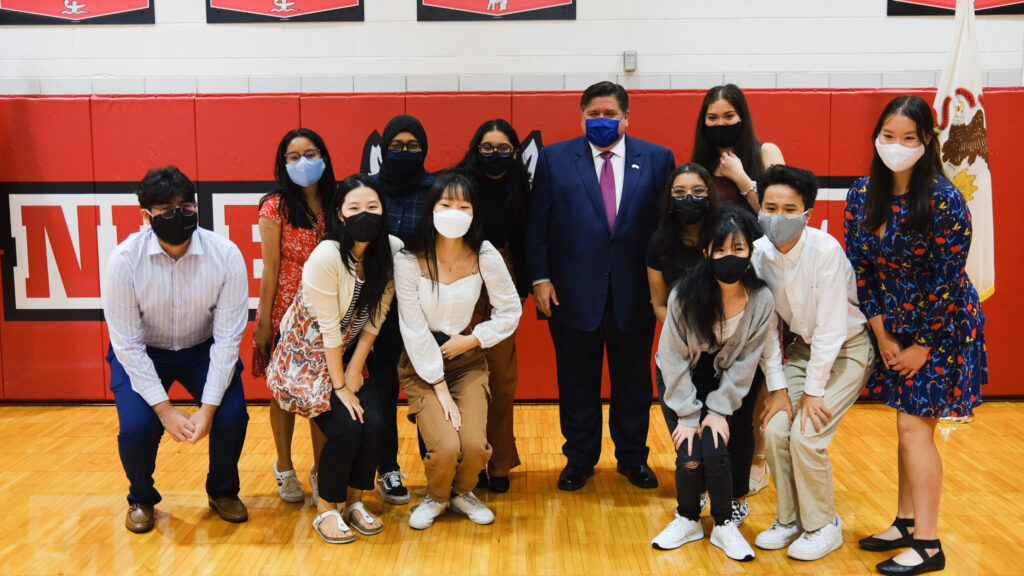 The road to the passage of the 2021 TEAACH Act in Illinois started with the drafting and introduction of this historic piece of legislation that we led. Our months-long campaign work included :

+ Sending 15,000 text messages to Illinois residents to build public support
+ Mobilizing 1,000 witness slips in support of the bill
+ Activating 800 constituents to email their state legislators urging them to co-sponsor and vote year on the bill
+ Collecting 65 testimonials from students, community members, and educators
+ Convening of an 8 organization steering committee of to lead advocacy efforts

In support of the implementation of the bill Advancing Justice | Chicago has:

+ Convened a team of volunteer educators and Asian American community stakeholders to create the Asian American Education Resource Database
+ Launched professional development (PD) workshops for K-12 educators, leading 36 PDs that reached 693 as of November 2022
+ Reached out to 67 school districts, regional offices of education, teachers unions, and other educational institutions to share our implementation resources and curricula 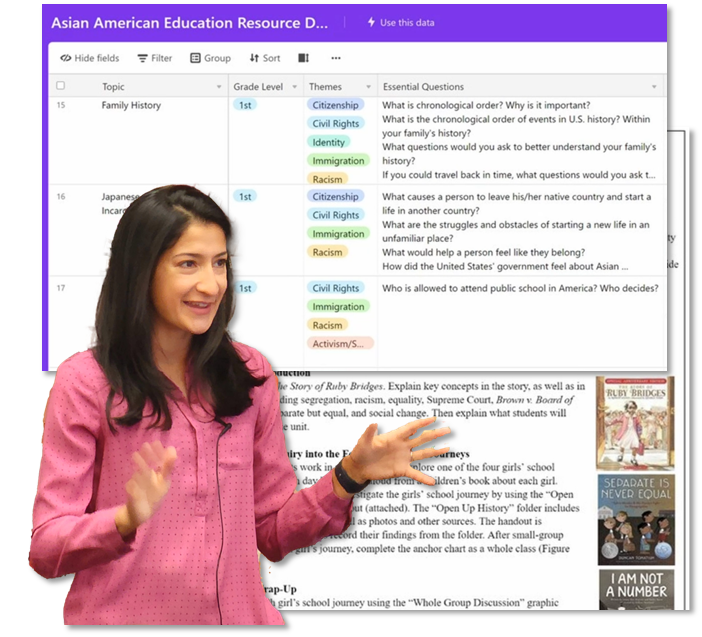 Above: Smita Garg, one of our TEAACH Act professional development facilitators, shares curricular resources with educators. 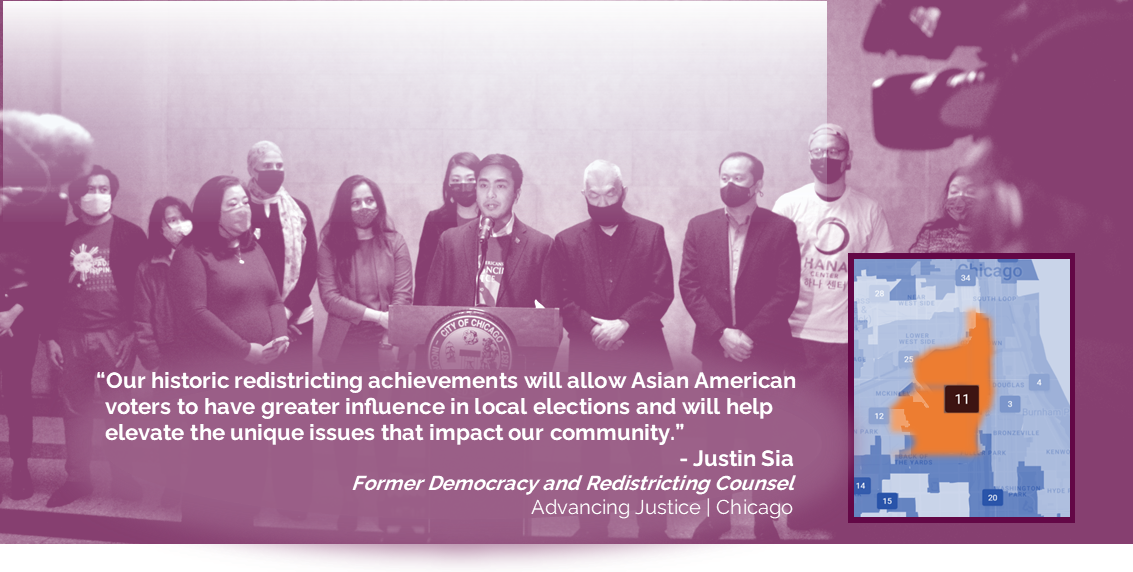 This year, Advancing Justice | Chicago resumed its countywide poll watching program for the June 2022 primary election and the November 2022 general election. Our poll watchers monitor polling places throughout Cook County that are legally required to provide language access in the form of bilingual election judges and translated ballots and voting materials.

Our Journey is Just Beginning!

For the past 30 years, Advancing Justice | Chicago’s members, supporters, funders, and community partners have made it possible for us to build power with and for the Asian American Community. Thank you for believing in our mission and investing in our work.

Help us continue to increase our impact by investing in the next 30 years of advancing justice! 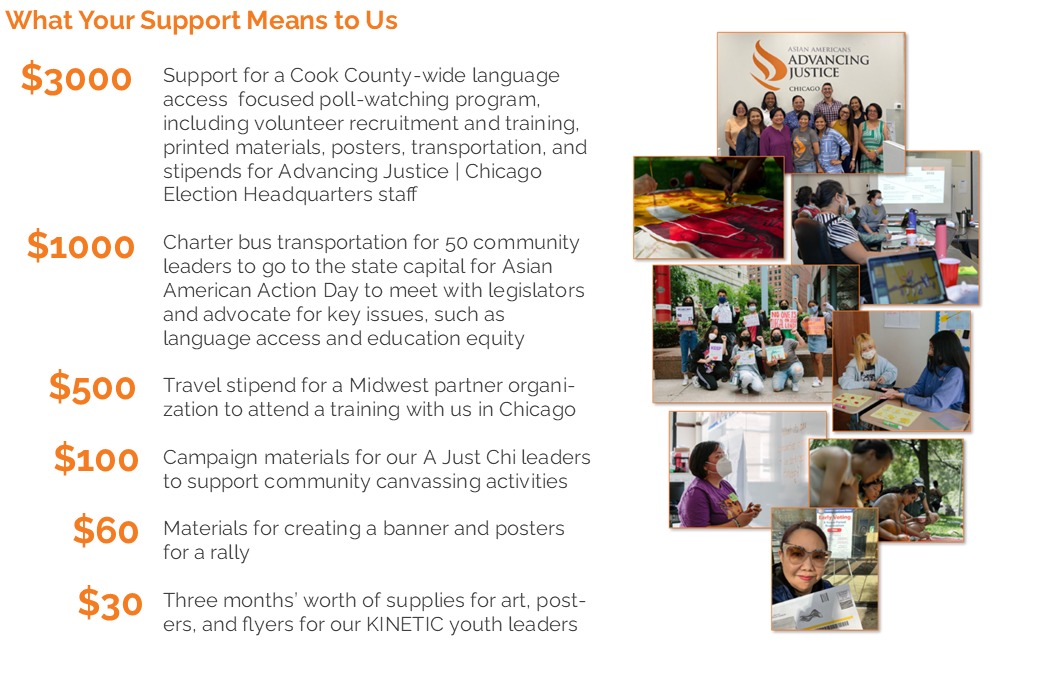 The Asian American Institute (AAI) is founded as a research and policy organization with the goal of uplifting the profile of Asian American communities in Chicago.

AAI lobbies to nominate Bill Lann Lee as Assistant Attorney General for Civil Rights, and to confirm Paul Igasaki as a commissioner on the Equal Employment Opportunity Commission.

AAI promotes Asian American and Pacific Islander participation in the 2000 Census, and publishes “A Comprehensive Guide to the Asian American Community of the Greater Chicago Area.”

AAI forms a coalition on redistricting, and sets the ground work to launch poll monitoring programs to ensure language access compliance under the Voting Rights Act during the 2002 election.

AAI and the Association of Asian Construction Enterprises successfully lobbies the City of Chicago to re-include Asian Americans in the affirmative action program for city contracts.

AAI is a founding member of the PanAsian Voter Empowerment (PAVE) Coalition, which organizes the first-ever Asian American-focused mayoral forum.

Advancing Justice | Chicago leads the championing of the Automatic Voter Registration and the Illinois TRUST Act for the state.

Advancing Justice | Chicago launches Bystander Intervention Trainings in partnership with Right To Be in response to rising anti-Asian sentiment and violence.

Advancing Justice | Chicago leads the passage of the TEAACH Act, making IL the first state in the nation to require Asian American history to be taught in all public schools. 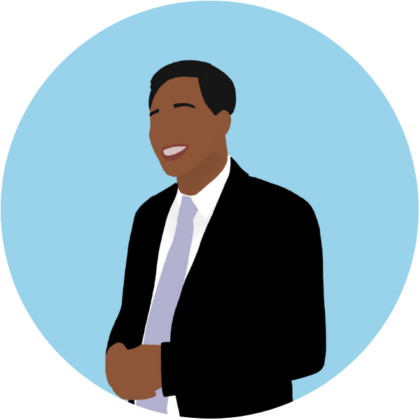 "What's great about Advancing Justice | Chicago is the focus on raising leaders for both today and the future - leaders who believe in racial equity who will fight for it through civic engagement and policy advocacy. The staff and grassroots leaders inspire me every day."