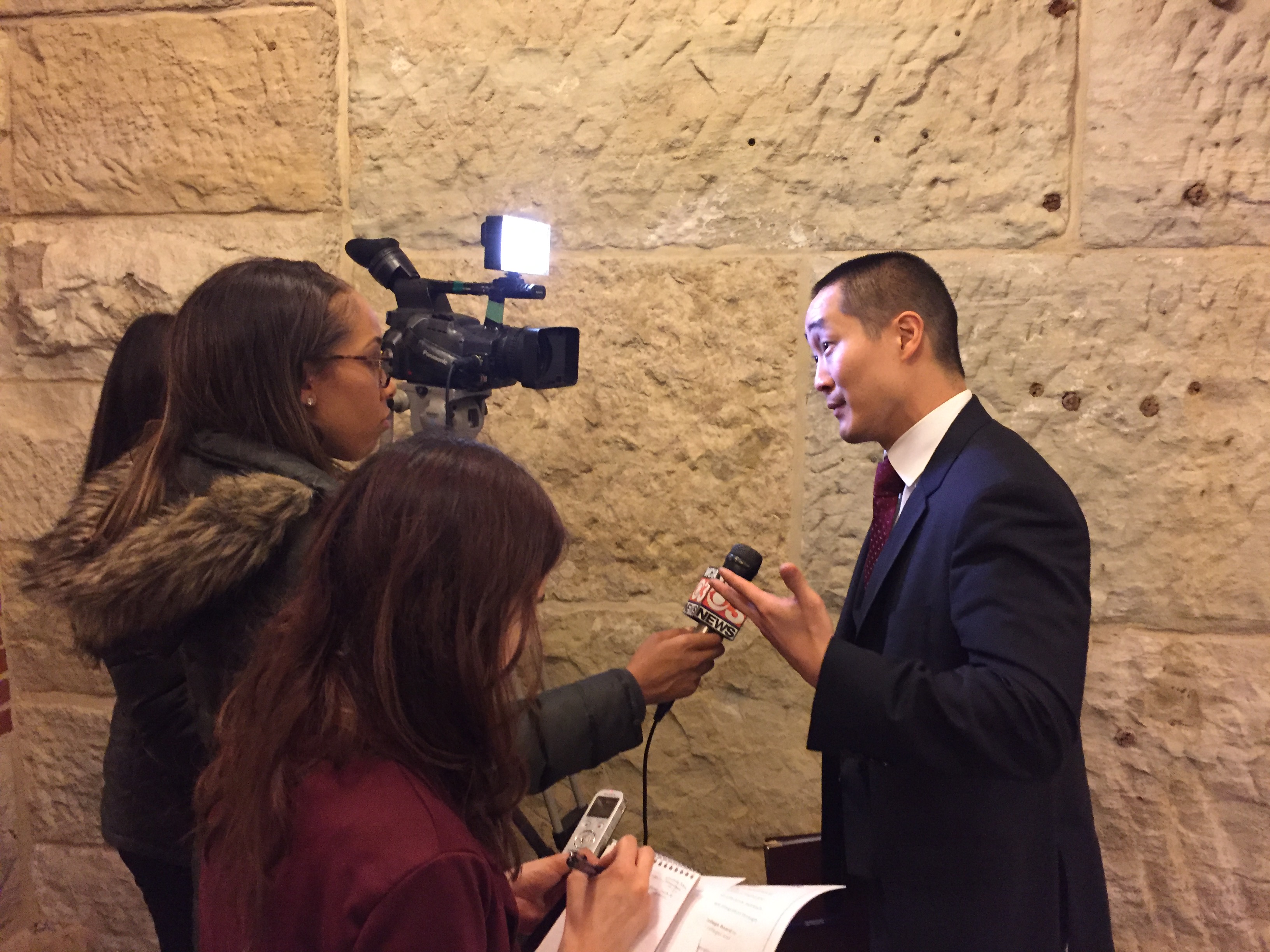 As City Council plans to vote on a final citywide map this week, Asian American leaders urge the Council to draw an Asian American majority ward and protect Asian American communities of interest in Albany Park and West Ridge.

CHICAGO, IL — Asian Americans Advancing Justice | Chicago and the Coalition for a Better Chinese American Community (CBCAC) will hold a press conference on Tuesday, November 30th, 2021 at 9:30am at City Hall to demand that City Council members include an Asian American majority ward in Greater Chinatown and preserve Asian American communities of interest in Albany Park and West Ridge. Leaders from across the Chicago Asian American community will be in attendance.

CHICAGO, IL — Asian Americans Advancing Justice | Chicago will be holding a press conference on Monday, November 22nd, 2021 at 10:00am on the University of Chicago campus to denounce increased policing and surveillance in Hyde Park and surrounding communities in the wake of two local incidents of gun violence.

On November 9th, a recent graduate of the University of Chicago, Shaoxiong ‘Dennis’ Zheng, was shot and killed during a robbery in Hyde Park. That same day, there was also an unrelated shooting spree on 53rd Street that did not result in any injuries or deaths. In response to the fatal robbery, various students, primarily Chinese international students, organized a “We want safety” rally on Tuesday, November 16th. Afterwards, the University of Chicago and the Chicago Police Department (CPD) announced a joint plan to increase the presence of CPD and the private University of Chicago Police Department (UCPD) patrols in surrounding areas and to install additional surveillance cameras.

In the aftermath of the death of Shaoxiong ‘Dennis’ Zheng, we have seen an increase in racist, anti-Black sentiment, especially from Asian international students and community members (statement from the Organization of Black Students). While we fully empathize with the fears and concerns following the deaths of three UChicago students or recent graduates in the past year, two of whom were international Chinese students, we also recognize that gun violence is a complex issue that our communities have been reckoning with for decades. Hyde Park is one of the most policed neighborhoods in Chicago. Increasing policing and surveillance will not deter future gun violence because policing and surveillance do not address the root causes of violence, such as decades of disinvestment, structural racism, poverty, trauma, and lack of opportunity. Furthermore, ramping up policing and surveillance will contribute to the harassment, racial profiling, and police brutality that Black students and residents already experience.

Asian Americans Advancing Justice | Chicago is holding a press conference on Monday to show Asian and Asian American solidarity with the Black community and support for public safety for all communities in response to recent gun violence. Residents of the Hyde Park community, Asian American and international students at the University of Chicago, and allied organizations will be in attendance.

Chicago’s Asian American community grew in population by 31% and Asian Americans are the racial demographic that shows the fastest percentage growth in our city. Chicago’s Chinatown is often referred to in the news as the only Chinatown in the country that is growing, in stark contrast to other cities where gentrification has driven Asian Americans out of their historic neighborhoods. However, there is no Asian American representation on City Council nor has there been a single Asian American majority ward in Chicago’s 200-year history.

“We are disappointed that the map the Latino Caucus filed with the City Clerk does not include an Asian American majority ward. CBCAC has engaged extensively with City Council members to share several alternatives that include over 50-percent Asian Americans in the ward. The Chicago Advisory Redistricting Commission’s citywide map also includes a majority Asian American ward, which includes parts of Armour Square, Bridgeport, and McKinley Park,” said Grace Chan McKibben, Executive Director of Coalition for a Better Chinese American Community (CBCAC). “We have shown over and over again that a majority Asian American ward is supported by Census 2020 data.”

“Right now, Asian Americans do not have a seat at the table. Just as other communities of color have representation by their leaders, Asian Americans deserve to be able to elect an Alderperson who represents, understands, and advocates for our growing community’s needs,” said Grace Pai, Executive Director of Asian Americans Advancing Justice | Chicago. “To have a true “Coalition Map,” the Latino Caucus map must reflect Chicago’s diversity and create a majority Asian American ward.”

“When Pui Tak Center started in 1994, Chinese American students attending our ESL classes primarily came from Armour Square and Bridgeport,” said David Wu, Executive Director of Pui Tak Center which is located in Chinatown. “Now, more and more Chinese Americans attend our classes from McKinley Park and Brighton Park, demonstrating how the community has grown across the Southwest side. It’s critical for the new ward map to keep these communities together in a majority Asian American ward.”

Asian Americans Advancing Justice | Chicago and Asian American Midwest Progressives are searching for an Executive Assistant. This is an hourly contractor position of approximately 10-15 hours per week. We are looking for an individual who is highly organized, communicative, and detail-oriented. This position will be required to show discretion and handle confidential information in an appropriate manner. All candidates must be committed to our mission of building power through collective advocacy and organizing to achieve racial equity.

Applications should be submitted electronically via email to work@advancingjustice-chicago.org and include:

Please include “Executive Assistant” in the subject line of any email. Applications will be reviewed on a rolling basis. The ideal start date for this position is December 1, 2021 or sooner. Applications received by November 14, 2021 will be prioritized.

Response to First Parliamentarian Recommendation On Path To Citizenship

Response to Parliamentarian’s First Recommendation On Path To Citizenship

CHICAGO, IL — September 21, 2021 — On Sunday night, the Senate Parliamentarian issued her first recommendation on immigration. The Parliamentarian recommended against the inclusion of a pathway to citizenship for DACA recipients, TPS holders, farm workers, and essential workers, as written in the proposed budget reconciliation bill.

The Midwest Asian American Immigration Network is deeply disappointed by the Parliamentarian’s recommendation, but we believe in the power of collective advocacy to win citizenship for all. This is not a one-off process and is just one step of many in our fight to win a pathway to citizenship for our communities. Some politicians and mainstream media will want to declare the fight for citizenship over, but we know this is not the case. We are confident that Senate Democrats have the power to deliver and we expect them to do so. Millions of immigrants have given so much, especially during the pandemic, so we will keep fighting to win citizenship for as many people as possible.

“We are deeply disappointed in this decision but the fight to provide lawful status for immigrants in budget reconciliation continues. Senate Democrats have prepared alternate proposals and will be holding additional meetings with the Senate parliamentarian in the coming days.”

We call on Senators Durbin and Duckworth (IL), Peters and Stabenow (MI), Klobuchar and Smith (MN), and Portman and Brown (OH) to fight for a path to citizenship for as many people as possible. An unelected, unaccountable staff attorney for the Senate should not determine the future of millions of immigrants, especially when a bipartisan majority of voters supports citizenship for millions.

After 35 years of inaction, this is the year we will win citizenship for millions.